Firstly the way of identification of different hammers using on flakes (“Hard-hammer and Softhammer”) and secondly another video about the alternate and alternating reduction strategies (“Alternating and Alternate flaking method”).

Technology becomes humans from the beginning of our evolution. Along this process the ways for tools production have changed. The Arqueosnakcs series from IPHES presents two new videos in order to explain two concrete aspects of experimental archaeology, and how the specialists identify the production techniques. Firstly the way of identification of different hammers using on flakes (“Hard-hammer and Softhammer”) and secondly another video about the alternate and alternating reduction strategies (“Alternating and Alternate flaking method”).

The new videos take part of the Arquesnacks series, focused in to make easy the explanation of human evolution and archaeological science. From the site to the public, explaining quickly the advances of the field and laboratory research. 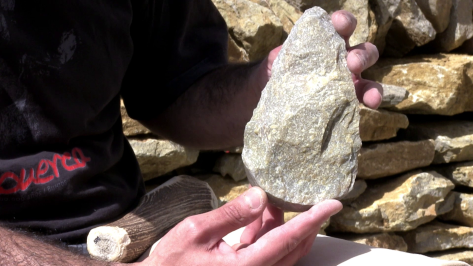 Each video is structured on a format question-answer. Is formulated a question and researchers and experts in each field give a reasoned synthetically response.

The ArqueoSnacks’ idea is for the archaeologist and researcher of IPHES Josep Maria Vergès : “It came to me to the need of audio-visual resources that could make it through a wide distribution network, which allows answering questions often posed by students or people visiting the sites or interested in our research”, he said.We has opted for the short format in order to make them dynamic and achieve a good reception by consumers of culture through mobile devices, something that hardly can be achieved with long documentaries. “Hence your name, ArqueoSnacks, because we intend it as a cookie, candy, anything you eat between meals (that would be the documentaries) to make you spend your appetite, while your walking or do anything else, without having to sit at the table”, points out Josep Maria Vergès.

The videos, available on channel of the IPHES at YouTube (IPHESComunicació), have been co-financed by Universitat Rovira i Virgili and IPHES. There have been three versions: in Spanish, in English and in Catalan. The company responsible for the realization of the videos has been Esclats Prehistòries Didàctiques i Natrox Produccions.The Directione has been in charge of Josep Maria Vergès and have contributed Miquel Guardiola and Juan Ignacio Morales, researchers at the IPHES

The cave was not inhabited between 35,000 years ago, when Neanderthals went extinct and more than 5,000 years later, when it was re-inhabited by Homo sapiens

Nowadays, the international scientific community believes that the Neanderthal extinction took place in Western Europe between 38,000 and 35,000 years ago. The archaeological site at Cova de les Teixoneres in Moianès could have witnessed this disappearance. This is suggested by a study recently published in Radiocarbon written by members of Leipzig’s Max Planck Institute in Germany, IPHES (Institut Català de Paleoecologia Humana I Evolució Social) and CENIEH (Centro Nacional de Investigación sobre la Evolución Humana). According to the study the aforementioned cave registered the presence of the Homo neanderthalensis up until 35,000 years ago, which was followed by a 5,000 year period in which it was not inhabited by humans until 28,000 years ago when it was inhabited by Homo sapiens.

The authors of this study reached these conclusions concerning the archaeological dating of the site using a new ultrafiltration method (Abox), which allows for a more precise filtering of carbon-14 samples than with previous systems. Applying this technique, the Max Planck researcher Sahra Talamo obtained the chronology of 17 animal bones that present cut marks made by the knives of humans that inhabited the cave during the cave’s last two stratigraphic units: level II and level III, 35,000 and 40,000 years ago respectively. The various archaeological dating records that have been obtained have been very coherent, the oldest being obtained from the lower part of the stratigraphic sequence and the more recent ones from the upper part, indicating that the sediment was never disturbed by later processes such as the formation of holes made by carnivores. This also indicates that humans, up until 35,000 years ago, continuously inhabited the cave. ‘From there on, it seems that there was a 5,000-year gap and the cave was not used by Homo sapiens until 28,000 years ago during the Upper Paleolithic Period,’ said Jordi Rosell, a researcher for IPHES, the head of the excavation at Cova de les Teixoneires and one of the article’s authors, along with Florent Rivals of the same institution and Ruth Blasco from CENIEH.

‘Unfortunately, the lithic industry located in the Unit IIa (associated to the past 35,000 years) does not allow us to attribute the findings to either of the two inhabitants of the area during that time period: Neanderthals and Homo sapiens. However, there is enough evidence to conclude that there were human groups present in Moianès’, states Jordi Rosell.

‘We think that this does refer to the last groups of Neanderthals that were present in the area. Even though the lithic industry is not conclusive, there seems to be evident continuity between the preceding stratigraphic units and there is nothing to make us think that this changed. In any case, we will try to figure out this mystery with the next seasons of excavations.’

Coinciding with the publication of this study, researcher Sahra Talamo was in Tarragona to present her results to members of the IPHES as well as to discuss the strategy that should be followed when continuing to study the archaeological sites in the Toll Caves (Moià, Barcelona) where Teixoneres is located. This researcher is part of the Sharing the space: Interactions between hominids and carnivores in the peninsular north-east research project, directed by IPHES and co-financed by the Government of Catalonia.